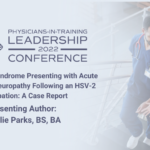 Introduction: Guillain-Barré syndrome (GBS), an acute and rare autoimmune disorder, causes ascending paralysis and polyneuropathy. GBS has been a relatively enigmatic condition that has taken clinicians and researchers decades to categorize and define the diagnosis, subtypes, and treatment. The first cases were French soldiers in 1916 and were reported by Guillain, Barré, and Strohl, who were physicians in World War I. In the 1980’s the acute axonal subtype (later named acute motor axonal neuropathy (AMAN)) was first reported, and immunoglobulin therapy and plasmapheresis became the accepted treatments. Certain infections have been associated with triggering Guillain-Barré syndrome, but further case-studies and research should continue to elucidate the extent of viruses and pathogens that can precipitate GBS.

Case presentation: This case-study is in relation to a patient Jane Doe who experienced perplexing neuropathic symptoms. She had sudden soreness bilaterally in her lower extremities that ascended to her upper bilateral extremities in the following week. She had no previous bacterial or viral upper respiratory infection but had an exacerbation of HPV-1 that began one month prior to the onset of her polyneuropathic symptoms. She was admitted to Houston Methodist Emergency Care for muscle weakness, but her atypical symptoms delayed her diagnosis until later appointments with her PCP and neurology at UT Physicians. Within this article the timeline of her symptoms, treatment, and recovery will be discussed, along with the key features of her symptoms, physical exam, lab and imaging results, and nerve conduction studies that led clinicians to the proper diagnosis.

Final Diagnosis: Despite the seemingly enigmatic onset of the patient’s ascending motor neuropathy, her final diagnosis was AMAN/GBS. AMAN/GBS can affect patients within a wide range of severity and through various potential triggers. Consequently, an extensive differential and studies were necessary for proper diagnosis. Finally, her case allows us to consider if there is a correlation between HPV-1 exacerbation and the onset of Guillain-Barré syndrome.

Management: The patient received IVIg treatments during her four days at Hermann hospital. Her posttreatment rehabilitation resulted in full recovery and consisted of approximately eight months of weekly PT/OT, which is within the normal range.