Watermelon Stomach-Rare Cause of Chronic Anemia

Watermelon Stomach-Rare Cause of Chronic Anemia 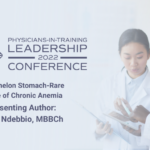 Introduction: Gastric antral vascular ectasia (GAVE), a.k.a. watermelon stomach is a rare but extremely important cause of chronic gastrointestinal bleeding, which if suspected can often be easily diagnosed and endoscopically managed in most cases. GAVE is often associated with liver cirrhosis, autoimmune connective tissue disorders, achlorhydria, bone marrow transplantation and chronic renal failure. The pathophysiological changes leading to GAVE remain controversial. Patient presentation varies from chronic iron-deficiency anemia to heavy acute gastrointestinal bleeding. Diagnosis is made by the characteristic endoscopic appearance of visible linear watermelon-like vascular stripes in the antrum. Several treatment options including pharmacological therapy with estrogen and/or progesterone, surgical antrectomy, laser endoscopic photocoagulation, bipolar electrocautery are available with various degrees of success. We present a case that we successfully diagnosed and treated with argon plasma coagulation.

Diagnosis and Treatment: We performed an EGD that showed moderate portal hypertensive gastropathy in the gastric body and actively bleeding gastric antral vascular ectasias which were successfully treated with argon plasma coagulation (APC). Patient was afterwards referred to a higherlevel of care facility for liver transplantation evaluation.

Discussion: GAVE, although a rare disorder, causes up to 4% of non-variceal upper GI bleeding. This case shows the crucial importance of having GAVE as a differential diagnosis in patients with chronic anemia as it is easily treatable. It is also important to differentiate GAVE from portal hypertensive gastropathy as GAVE does not respond to measures reducing portal pressures.