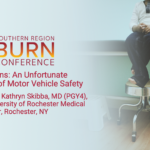 Introduction: Over 7,500 Americans are injured by motor vehicle crashes every day.7 The National Highway Traffic Safety Administration estimated that 2,790 lives in people age 13 and older were saved by frontal airbag deployment in 2017, and all new vehicles since 1997 are mandated to have dual airbags installed. The use of airbags in combination with seat belts has been shown to have an even greater effect than either used alone.6 However, with the widespread use of airbags in automobiles, there has been a surge in airbag related injuries including abrasions (63.6%), contusions (37.8%), lacerations (18.2%), burns (7.8%), fractures (3.2%), and retinal detachment (1.8%).1,3 Rapid deceleration is detected by airbag sensors which sets off a chain reaction resulting in airbag inflation upon frontal collision. The reaction involves igniting sodium azide, culminating in the release of nitrogen gas, carbon dioxide, and small amounts of alkaline aerosol.2 As an exothermic reaction, it generates significant heat measured up to 500C in some models.5 The airbag contents are released into the vehicle through two ports located on the backside of the steering wheel. Release of hot gas and alkaline substance into the cabin puts patients at risk for both thermal and chemical burns. The literature describes burns to the hands or face and the etiology is split between chemical alkali and thermal causes. There are numerous case reports of airbag related burn injuries but there is a paucity of literature that analyzes a cohort of these patients.2,4,8-10 At our institution, we have seen numerous burn injuries as a result of airbag deployment. This study aims to further characterize the size, location, severity, and consequences of burns from airbag deployment.

Methods: A retrospective review of all patients evaluated by the burn service was performed from 5/1/2015-4/30/2019. Inclusion criteria was patients of all ages with cutaneous burn injuries resulting from motor vehicle airbag deployment. Demographic data and burn characteristics including total body surface area (TBSA), burn severity, anatomic areas involved, and surgical treatment were reviewed.

Results: A total of seventeen patients met inclusion criteria: 82.4% female, 17.6% male. The average age during burn evaluation was 40.4 ± 23.7 years. Most patients self-identified as Caucasian (82.4%). Comorbidities were found in seven patients which included obesity (35.3%), psychiatric illness (23.5%), smoking (11.8%), hypertension requiring medication (11.8%), and diabetes mellitus (6.5%). Three patients were hospitalized with an average length of stay of 12.7 days, although they were admitted for concurrent injuries sustained in the MVC and would not have been admitted solely to receive burn care. No patients required an ICU stay, were intubated, or died during admission. Etiology of the burn was often not clinically distinguishable; six patients (35%) were categorized as receiving chemical burns and three (18%) from thermal injury. The remaining eight patients had no etiology specified other than association with airbag deployment. There were fifteen patients with exclusively second-degree burns with an average TBSA of 0.47% ± 0.40%; one patient suffered an exclusively third-degree burn with a TBSA of 0.16%; and one patient had both second and third degree burns with a total TBSA of 0.51%. The average TBSA for all patients was 0.45%. Ten patients (58.8%) had burns on the hand or wrist; Six (35.3%) had forearm or upper arm burns; 2 had chest burns, one had a neck burn, and one had an anterior thigh burn. Eight patients (47.1%) suffered burns to more than one site. No patients received oral antibiotics for their burn wounds and there were no diagnosed burn wound infections. All patients were able to heal from their burns using our standard daily wound care protocol; therefore, no patients required surgical intervention. The average time to healing and complete re-epithelialization was 11 ± 5 days.

Conclusion: While airbags remain among the most effective method to prevent serious injury from motor vehicle accidents, the literature has cited several cases of cutaneous burns caused by airbag deployment. The burns are a result of either contact with alkali chemicals and/or thermal injury created by the exothermic reaction of deployment. The clinical manifestation of the burn may not distinguish whether it was a chemical or thermal etiology, as seen in 47% of our patients. This is important because initial management of chemical burns includes decontamination through water irrigation. We recommend that if there is a suspicion for burn resulting from an airbag, the wound should be copiously irrigated and treated as though there is alkali chemical contamination. Notably, the average wound size was small at 0.45% TBSA. Most wounds were determined to be second degree; only 12% of patients had full thickness burns. This is important to consider because all patients healed their wounds without need for skin grafting or other surgical intervention. The anatomic locations of burns were consistent with current literature, mostly (88%) occurring on the hands or upper extremity. We did not have any patients with facial burns, but one patient did suffer from a burn to the neck. Interestingly, two patients had burns to the chest and one patient had an anterior thigh burn. This indicates that airbag related burns can occur outside of the upper extremity and history of airbag deployment should prompt a thorough exam for cutaneous injury on initial evaluation. Although the wounds may be considered minor, burn injuries should not be an expected complication of airbag deployment. Patients who experience injuries secondary to airbag deployment are inconvenienced by burn management including emergency department and clinic visits, as well as wound care. Additionally, they suffer from the pain of the burn wound and may require time away from work until re-epithelialization which was shown to be 11 days on average. Burns resulting from airbag deployment therefore are both a financial and time burden. Patients may suffer permanent scars from the burns, which has been shown to occur in cosmetically sensitive areas such as the hands and face. There is no question about the efficacy of airbags in preventing death and serious injury. However, the current mechanism of airbag deployment is intrinsically hazardous to passengers as it releases hot gases and alkaline substance into the cabin. Adverse outcomes such as thermal and chemical burns may be avoided with alteration in airbag deployment location or design. Airbag related burns should not be minimized as they cause pain, scarring, and a financial and time burden to the patient.

Download Abstract
Posted in: Burn Medicine57
Back to Abstracts
Physicians-in-Training